The Paról or Christmas lantern has become an iconic symbol of the Filipino Christmas. Starting as early as September of each year, the kababayans usually prepare this traditional lantern along with other Christmas decorations, signalling the coming of the season. Once the parols are put up, these lanterns remain until January to honour the Three Kings and their visit to the infant Jesus in Bethlehem. Filipinos are always excited about Christmas and hanging a parol in their homes means that the spirit of Christmas is in the air.

The word paról is derived from the Spanish word farol, meaning “lantern”. Another, less-known name for this and lanterns in general is paritaán. The Parol is a traditional Filipino Christmas decoration, which usually has a five or eight point star-shaped Christmas lantern. This has been a tradition for more than 100 years. The Parol uplifts the spirit, instills a sense of pride and hope, does not only brightens Filipino Christmas, but also serves as an inspiration for Filipino ingenuity and creativeness. It reminds the Filipino Christians of the star of Bethlehem that guided the Three Wise Men on their way in search of Baby Jesus. The tails of the lantern serve as the rays of the star. 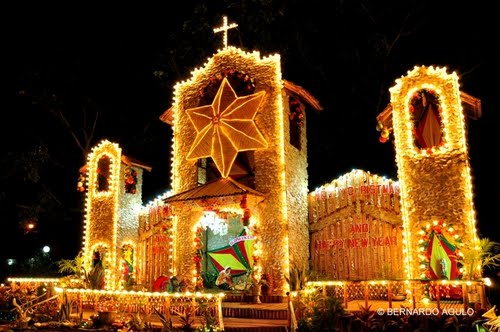 The traditional materials for making parols are mostly simple — bamboo sticks, Japanese rice paper, and crepe paper. In modern times, plastic, heavier paper, cellophane, capiz, and other materials are used to make the parol. The traditional candle or oil lantern inside has been replaced by electric lights, thus lanterns are even more beautiful and bright at night. The parol-making tradition clearly began after the Christianization of the Philippines. The practice of making parols was encouraged by the Church and resulted in the elevation of parol-making to an art. To this day, new innovations are being made to the design of parol lanterns. Villages, institutions, schools, and even government bodies organize parol making contests each year to encourage the filipino people to show off their craftsmanship and artistic abilities to create a truly unique and extra-ordinary christmas lanterns which symbolizes the Filipino Christmas tradition.

Although the use of the paról as a Christmas decoration is chiefly done in the Philippines, other countries where the Filipino diaspora have settled also carried the Philippine tradition of hanging paróls in their halls, windows, and even on trees during Christmas to reminisce their traditional Christmas celebration in Philippines and remembering their wonderful childhood memories each December.