1. Some horticulturists suspect that the banana was the earth’s first fruit. Banana plants have been in cultivation since the time of recorded history. One of the first records of bananas dates back to Alexander the Great’s conquest of India.

2. In Ireland, children who celebrate their birthday are given ‘birthday bumps’ by holding them upside down and bumping them gently on the floor for every year of their life. An extra bump is added for good luck.

3. You have no sense of smell when you’re sleeping, and you can see your nose all the time but somehow your brain always ignores it!

4. Snails produce a colorless, sticky discharge that forms a protective carpet under them as they travel along. The discharge is so effective that they can crawl along the edge of a razor without cutting themselves.5. How long do bills last? A US $1 bill or a $10 bill last for an average of eighteen months. Five dollar bills last around fifteen months, and twenties kick around for two years. The larger denomination bills can last up to eight years. Good thing that the average coin lasts for 25 years, since new pennies cost over 1.67 cents each to make.

The recipe for Seekh Kebab

Clean the boneless chunk of beef of all layers of fats and veins. Now, make thin slices from the chunk. Each slice around 3 cm wide and 15 cm long. Make as many slices as possible. In a big hollow bowl, add in all the ingredients. Mix and knead really well. Massage with both hands at times to marinate well for 10 minutes. When done mixing, cover and let marinate for 7 to 8 hours. After 8 hours, take the bowl with the meat. Make a hollow in the middle of the meat using your fist. That is, punch down the middle part of the meat and make a hollow well. Add 2 tblsp oil to the hollow part. Now, light few chunks of coal and keep it in the oil (in the hollow part of the meat), and cover the bowl. Once there is no more smoke, take the slices and sew in to skewers (shikhs). When all the meat slices have been sewn, put the skewers on the grill, preferably coal stoves. Baste the kebabs with some stored mustard oil once in a while. Turn the skewers when one side is done. Grill each shikh for about 20 minutes.

– Send money to your loved ones in Bangladesh via Remit2Home Online Money Transfers.

Dhaka Zoo is the largest zoo in Bangladesh situated at Mirpur, about 16 km from the centre of Dhaka city. It is the National Zoo under the Ministry of Fisheries and Livestock, started as a menagerie at the High Court premises in Dhaka in 1964, and moved to its present location in 1974. In the same year it was ceremonially opened for public on June 23, the zoo occupies an area of about 75 hectares.

The National Zoo of Bangladesh – Dhaka

It has two lakes named ‘The Nothern Lake’ and ‘The Southern Lake’ which are of about 13 hectares receiving thousands of waterfalls every year in winter. Dhaka National Zoo Lakes have always been a prime destination for visitors as they possess great variety of fish like rohu, catla, mrigal, kalibaus, catfish etc. The Nothern lake being bigger than the Southern lake, is the most preferred lake for fishing by the visitors.

Monkeys and many other animals in the zoo

The total number of vertebrate fauna in the zoo is about 2,150 in 191 species. Included in these animals are about 551 mammals under 64 species, 1,543 birds under 90 species, 73 reptiles under 15 species, and about 104 aquarium fishes under 23 species. To attract visitors besides many fascinating animals, there are 15 tigers, 21 lions, 9 hippopotamus, about 200 monkeys and 33 pythons. Moreover, some rare and interesting animals such as the rhea, peacock, zebra, elephant, African grey parrot, water buck, impala, emus, baboon, chimpanzee, gayal, black bear, tapir, mandrill, and estuarine crocodile provide additional entertainment to visitors.

Wild animals in the zoo

About 3 million visitors visit the Zoo every year. Except Sunday the zoo remains open on other weekdays from 8:00 am to 5:00 pm (October-March) and from 8:00 am to 6:00 pm (April-September). It also remains opens to the visitors for certain hours during government holidays. The beautiful natural environment of the zoo offer almost all recreational facilities to the visitors, a large part of which is constituted by students and children. There is an information center at the entrance. The visitors can seek any necessary information there. Even wheel chairs are available for old and disabled persons. The zoo has an advisory committee headed by the Minister, Ministry of Fisheries and Livestock. 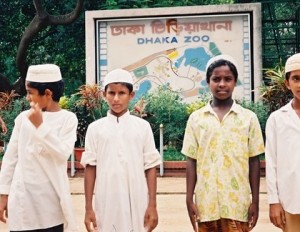 The Zoo authority has taken initiative for projects of upgrading the zoo like – Safari Park, so that the animals may move openly and people would visit them within the protection of the cage. Another plan is providing battery regulated client cars for old people and children. The other plans include developing the children park of the zoo, to thrive the zoo museum and starts zoo education. A new dolphin corner and a butterfly garden will be set up at Dhaka Zoo to attract more visitors. A visit to Dhaka Zoo is not only entertaining, but educational too, as visitors get to know more about animals found in Bangladesh, as well as animals from other parts of the world.

Attracting over 3 million visitors to the Dhaka zoo annually.

Translation: Saying something irrelevant to the present occasion.

– Send money to your loved ones in Bangladesh via Remit2Home Online Money Transfers.

How to save money while working abroad for OFWs

A lot of kababayans working outside the country have the need to send a big portion of their salaries to Philippines every month to sustain their family. As an OFW and the sole bread winner for the entire family back home in Philippines, it is important to save money for the future while still maintaining their health physical strength also the capability of working abroad. Remember that work / job abroad is not permanent, anything can happen anytime, and an OFW grows old, which, unfortunately means no retirement benefits for them especially to those who are working in the blue-collar category. A kabayan who quits working abroad to rest home in Philippines should have a master plan on how to keep getting an income or to live in the country independently, without relying on the other members of the family. An ex-OFW should be financially sound after he retires. Otherwise, an ex-OFW will end up with nothing and would have to start his life from scratch once again, hard years of labor abroad will go all in vain, and eventually, will end up thinking of finding another job abroad even in retirement years.

1. Aim to save at least 10% of your monthly income.
2. Avoid using credit cards.
3. Know all the expenses back home and send money according to the list; be in control of your finances after all, you have worked hard for your money.
4. Settle all your debts fast (all the loans back home should be paid off before you quit or end your contract).
5. Learn to say No – some family members keep asking for expensive gifts and hi-tech gadgets for every occasion, while you don’t even have a day’s off or rest trying to earn more money.
6. Live according to your means.
7. Avoid eating out and weekend parties with friends.
8. Set a daily budget-ceiling; do not overspend beyond the budget.
9. Look for wise investments in Philippines and start immediately while you are earning a good income.
10. Use the internet to communicate in Philippines rather than spending money on phone calls.
11. Avoid or stop vices like drinking, smoking, and buying luxury items.
12. Keep a secret bank account in Philippines and start sending money into that account unknown to your family members.
13. Encourage your family in Philippines to start saving money from remittances which you send each month, it is after all your own hard-earned mone.
14. Find a sideline or extra source of income during your free time to earn extra income.
15. Start saving today! 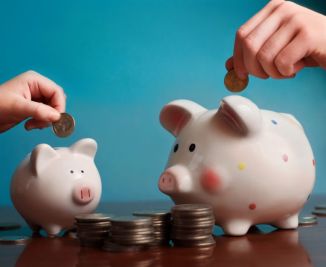 Chicken Tocino is a sweet chicken dish, which is an all-time Filipino breakfast favorite. It is a simple and easy to prepare Filipino food which involves marination of the meat overnight in a sweet mixture of pineapple juice & sugar. The marinated product can be stored in the fridge for a longer period, and cook only the desired quantity. You can fry the meat easily and enjoy the dish especially during breakfast along with fried rice and egg. The combination of which is what we call ”tosilog” in Philippines – which means Tosino, sinangag, and itlog.

How to Prepare?
Slice the chicken into flat, thin pieces, set aside.
Combine all other ingredients and stir well.
Marinade chicken in the mixture.
Cover and refrigerate overnight. Turn at least once.
Pan-fry in cooking oil.
Serve it with steamed or fried rice.